Today is May Day, the international day of recognising the work and accomplishments of unions. In many countries, particularly the UK, there are marches on the day; in Australia we celebrate on the first Sunday or May instead – evidence, if any were needed, that unions aren’t (despite Conservative attempts to indicate otherwise) disruptive whenever they can be.

Although I’ve been a member of my union since the month I was registered, now 22 years ago, I attended my first May Day march in 2012, in the aftermath of Victoria’s epic nurses’ and midwives’ campaign to keep safe care ratios, an all nurse/midwife workforce in public acute care, and prevent the ludicrous and antiquated re-introduction of split shifts and ad hoc movement of specialist staff between wards and across campuses. I’d like to take this opportunity to thank then-Premier Baillieu for radicalising me, because though I was always active in campaigns, and attended my first activist march at a teenager, it wasn’t until our 2011/12 EBA campaign that I became passionate about the union movement and the need to take action in the face of injustice.
That year, in recognition of our success, Victorian Trades Hall Council asked ANMF (Vic.) to lead the march, and dozens of red-clad nurses and midwives tried, once again, not to walk at a nursing pace that would leave the other participants trailing behind us!
I’d had the opportunity to speak with members of other unions during our campaign (special thanks to former ANMF (Vic) Secretary Belinda Morieson, former Assistant Secretary Hannah Sellers, CFMEU member Benjamin Gettler, and the Ambulance Employees, Australia officials who leant their support at my hospital, and the members and officials of every other union that supported nurses at their hospitals during our walk outs). This, however, was the beginning of what I hope will be a long and happy relationship with the wider union movement.
And here’s what I’ve learned – whatever our industry, and whatever country we’re in, our issues are broadly the same: for the rights of workers to be safe, treated fairly, appropriately compensated for their work, and to have ongoing improvement in conditions.
May Day is a family event – there are rides for children, sausage sizzles and entertainment – because union values are family values. Without unions there would be no notion of work/life balance – Victoria’s unions are responsible for the first 5.5 day week (thanks to the Builders’ Union), and Victoria’s stone masons achieved the first 8 hour day in the industrialised world.

In fact, every workplace entitlement we have, from even having annual and sick leave (let alone paid leave) to occupational health and safety, is thanks to the work of those who went before us. They risked their careers, and in some cases their lives, standing up and fighting for rights and conditions many of us take for granted today.
So on Sunday I will march to honour those who went before us – the men and women who worked for a better life for all of us, not just a hundred and twenty-odd years ago but the nurses and midwives who struck in 1986 to protect our professions, the teachers who walked last year to protect our future, the CFMEU members who took action because of unsafe workplaces, the paramedics who are now two years into a fight the Victorian government continues to ignore, as deaths surpass fifty thanks to an ambulance crisis they refuse to acknowledge. 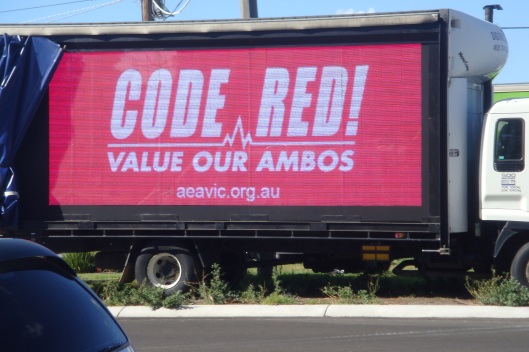 I will march on behalf of those colleagues who have to work, but are as dedicated to the cause as I am. For my colleagues who don’t appreciate what unions have done for them, but would be lost without them. I will march for the patients and students and members of the public who are better off because of unions, for the small business owners who don’t realise that fair pay for all means more discretionary income, and more profit for them.
And I will march to show our Federal government that Australia’s union movement is strong, united, and prepared to act if there is even a thought that “dead, buried, cremated” WorkChoices pay be resurrected. Because I may have been present at the anti-WorkChoices rallies but I wasn’t involved – and this time I will be.
If you believe your life, your families’ lives, the lives of your children, your community and your country are better off because of unions; if you want to let a Federal government that that has already broken multiple election promises know that the Australian public won’t take attacks against the average person lying down; if you believe in the principles of work/life balance, equality, a fair go, workplace safety, everyone having a voice and representation, big picture thinking, and a better Australia for us all, not just those already best off, join me.
I’ll be marching from Victoria Trades Hall – 1PM, Sunday, May 4th. Check out http://www.australianunions.org.au/events for marches in your area – and if you can’t be there in person, send a shout out through social media.