It will come as no surprise to anyone who knows me, follows me on Twitter, or has read any of these posts, that I’m an activist for progressive change and equity, nor that I’m an active unionist.

Today I was sent a link to this campaign, calling on the Greek government to review a decision acquiting farmers who shot 28 Bangladeshi farm hands who had the temerity to ask for six months of unpaid backpay.
After signing the petition I posted and tweeted the link, and had this conversation with @FakeTonyAbbott1, a parody account of Australia’s Liberal* Prime Minister 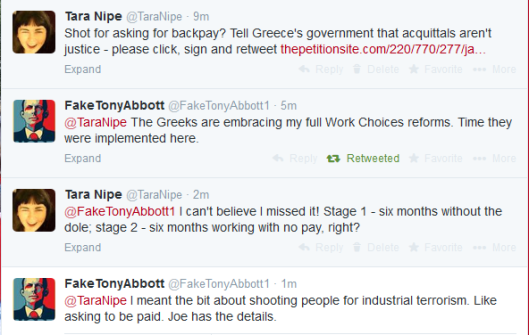 * for non-Australians: confusingly, the Liberal party is increasingly neo-conservative, not a Left organisation

These kinds of conversations are part of what I love about social media, but it also prompted me to explain why I’m a unionist – and by that I mean not just a member, but an active, engaged part of not just my own union but the wider movement.
I joined the Victorian branch or the Australian Nursing (and Midwifery) Federation when I first registered, in September 1992, and I became a job representative at the same time. Like many members my joining was less out of strong union motivation (though I’ve been a Lefty since I was a teen, first marching for nuclear disarmament when I was fourteen or fifteen), but I was involved in every industrial campaign, and the 90’s in Victoria were a time of industrial threat and savage cuts. I wrote the then-Secretary if ANF (Vic) a fan letter when she lead us to win the world’s first nurse:patient ratios in 2000, and I closed beds in every campaign after that, as we fought to keep them.

In the early days of my union involvement we had a monthly meeting – reps, our organiser, and hospital management, including the Director of Nursing and the head of HR. It was quickly clear that members didn’t need to do anything wrong to need representation, and that I wouldn’t want every member caring for my family; I understood that the role of the union is to represent and advocate for members, but also for the profession, which means that representation doesn’t mean returning unsafe nurses to the bedside. And, from those very early days, my very clearest impression was of integrity.

I know that’s not the dominant narrative about unions, but it’s true nonetheless – and while I know it’s sadly not universal, I’ve yet to meet a union official who didn’t strike me as being committed to their members, their industry, and the common good.

I don’t come from a union family. To this day my father is virulently anti-union. And in fairness to him, I think he was a good employer – but he never seemed to understand my position, that not all employers are. My sense of social justice doesn’t come from him, and it’s not new.

The most recent Victorian nursing and midwifery EBA gave me an opportunity to be more involved than had been the case previously, in no small part because of the sheer length of the campaign, but also the integration of social media, and that it substantively kicked off when I had time off work. And the more involved I became, the clearer it became that we face common concerns – and that’s not just nurses and midwives, across wards and units, hospitals, states and territories, and nations.

At a statewide members meeting, Victorian ANMF Secretary Lisa Fitzpatrick told us about a campaign National Union of Workers members were running at Sigma in Rowville, and a group of us went to support them. It was my first experience of standing in front of a truck, of an organised and long-standing picket line, of police officers who (though not forceful) were considerably less friendly than they are with nurses, and I was struck by how similar our issues were – a fight not for new, improved conditions, but to keep those they already had – safe staffing, penalty rates, recognition of the toll shift work takes. And, as with our campaign, they were successful! 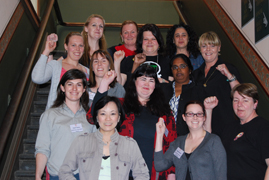 made it clear that this was the case for all the industries represented. I was shocked to learn just how endemic insecure work is, and just how many teachers, particularly graduates, are on contracts. And I attended the inaugural Fluro Fightback at Southern Cross station.

Spell-bound by Billy Bragg, I didn’t get to take a crowd shot until after he left, but the crowd? Quite something

A year later I was in London for a conference and saw a tweet about the London Fire Brigade Employee’s Union was campaigning against the closure of fire stations. I was free, so I went along to support them, and got to sit in on a London COuncil meeting, and once again realise that – despite geographic, polical and industrial differences – far more unites than separates us.
I’ve stood for Victorian fire fighters, too. And teachers, paramedics (I’m not just a nurse, I play one on YouTube), asylum seekers, workers and unions across the globe – online, if not in the flesh – and campaigned for marriage equality. Because inequality hurts us all.

All of which is preamble to this:
I’m an activist because injustice makes me sad, indignant, protective, outraged and filled with righteous anger – and those feel better if I act.

I’m an activist because I believe I have a duty to leave the world, even a tiny corner of it, better than I found it.

I’m a unionist because we share principles – fairness, representation, a voice for the voiceless, and a belief that what improves those who have least lifts all of us, while inequity hurts all of us.

I’m an active unionist because I believe it honours those who fought before me, were imprisoned and threatened, beaten, fined, and in some cases killed, for entitlements too many people seem to think were the result of natural justice, or kind employees, if they think about them at all; rights that they think are inviolable.

I’m an active unionist because I know that if they’re not defended, what was won can be lost; because it’s easier to keep them than to regain them.
And I’m a passionate, active unionist because there’s more need for people prepared to stand up than there’s been for decades. Workers across the world, including here, are under attack – and unions are the only organisations that will stop a movement that appears hell-bent of rolling us back to the pre-Industrial age.

Think that’s an exaggeration? Our very own government wants employees to be able to trade off entitlements, work for less than minimum wage, will actually compel unemployed youth to work for under minimum wage (and lose legal protections).

It angers, frustrates and bewilders me that more employees don’t realise the value of unions – and that so many members are apathetic and inactive. One person can make a difference, and if we’re united, there’s no stopping us:

Never doubt that a small group of committed people can change the world. Indeed, it is the only thing that ever has. ― Margaret Mead

1 thought on “Why am I an active unionist?”