Like so many posts, this started as a Facebook response, in this about an advertised opportunity by my union for student and newly graduated members to participate in Victorian Trades Hall’s summer internship program. in the comments one member wrote: Aren’t there enough issues to resolve under the “nursing” unbrella without turning members into activists.

The page admin replied that part of resolving nursing (and midwifery) issues requires taking an active role in the union, including job representatives and health and safety representatives being activists.

The member acknowledged that, then added:

I bet the focus will be on everything but direct nursing conditions. Climate change, Refugees The homeless, Domestic violence sufferers just to name a few. ALL worthy causes indeed but why does a Nurses Union have so many fingers in so many pies. ANMF should first and foremost be putting nurses first in my opinion.

Which is, of course, where I came in.

Dear member – all the things you list are within ANMF’s remit. First, they’re all connected with health and thus with both our patients and our members, who are nurses, midwives, and carers.

Second, the Federation’s commitment is to members, the professions, and the communities we serve and are part of. That includes those most affected by climate change (people living in rural and remote areas, particularly farmers), people fleeing danger to build new lives (both refugees and family violence survivors), and people whose health needs are made worse and/or more complex by poverty (which includes but is not limited to homeless folk). We have members who care for all these groups, members who are or have been from all these groups – particularly the last: women over fifty are the fastest growing homeless population demographic in Australia.

Third, as demonstrated by ANMF (Vic)’s participation in this program, we are part of a broader union movement. Not only do our brethren in other unions support us in our campaigns, as we surely all remember from 2011/12, their gains contribute to our conditions, starting with Victorian stone masons winning an eight-hour work day. I therefore imagine that, just like with the Anna Stewart Memorial Project, participants will learn about the issues we have in common. That includes casualisation, sub-contracting, the erosion of conditions, increasing productivity demands (i.e. workload), occupational violence and aggression (including sexual harassment), and representation. However, the focus of the program is on what the branch does for members.

Finally, we wouldn’t have achieved or kept any of the conditions we have without the activism of our membership and leadership. Even when directly affected only some of us speak up and fight; how quickly our battles would be won if everyone took action! But few of us can do it on our own.

I will never forget the Neonatal Emergency Transport Service nurses who came to the Alfred during 2012’s industrial action – they weren’t affected by it, as they’re covered by a separate Agreement, but they came in solidarity, in response to a FB request by a nurse from the Royal Children’s Hospital after he saw how few nurses felt comfortable taking action at that site. That was on Saturday, the only day I missed, and so I can take none of the credit for them starting a statewide day of action to support nurses at the Alfred – inspired by their call to abandon action at their own hospitals, nurses as far from Melbourne as Mildura organised buses to support their colleagues for ‘Alfred day’, contacted Trades Hall to seek advice, and notified the press. On Wednesday, March 7, 2012 then-ANF (Vic branch) Secretary Lisa Fitzpatrick announced that the government had finally agreed to sit in good faith at the negotiating table, which they had refused to do for months. She did this from the Alfred steps, to hundreds of members, supporters, and media. 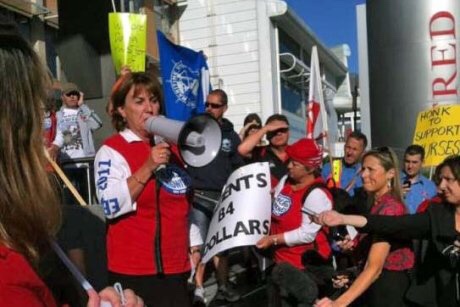 The campaign was a success, thanks to months of tireless work by ANF staff, members, and the support of other unions.

It all begins with activism. That, plus vision, organisation, and solidarity get us this, which is why all unionists need to be activists – not only for the issues that directly affect us, but for those that affect us indirectly.